Join Us In Gallipoli – With Lt Col Peter Sweeney (Ret’d) 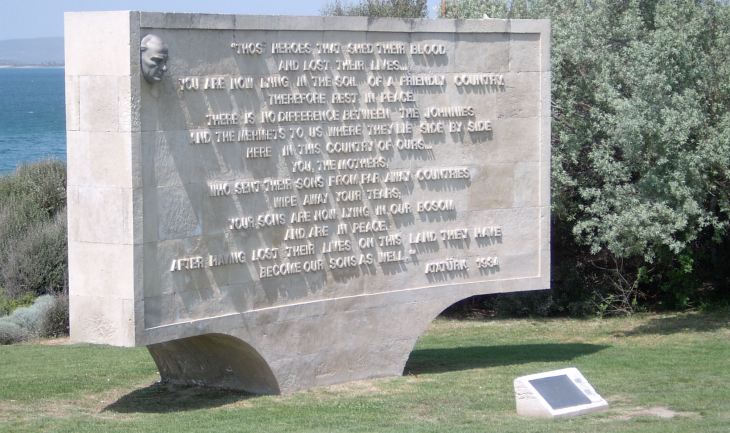 “Those Heroes that shed their blood and lost their lives .. You are now living in the soil of a friendly country, therefore rest in Peace. There is no difference between the Johnnies and the Mehmets to us where they lay side by side, here in this Country of ours … You, the mothers, who sent their sons from far away countries, wipe away your tears, your sons are now lying in our bosom and are in peace. After having lost their lives on this land, they have become our sons as well!” Ataturk, 1934

Lieutenant Colonel Peter Sweeney RFD (Retired) joined the Australian Army Reserve (Infantry Corps) as an Officer Cadet in 1966 and served, raising through the ranks until he officially retired as a Lieutenant Colonel in 2000. He has received a number of Awards and Commendations during his service, and during his service and since retirement has travelled to a number of Historical Battlefields across the world including Gallipoli, Islawanda, Rorkes Drift, Pearl Harbour and Normandy to name a few. Today Peter is a Gallipoli Specialist and member of the Guild Of Battlefield Guides (UK).

We have been incredibly lucky to have Peter ask to lead two great departures to Gallipoli in 2015 – the year, 100 years on from when the ANZAC Forces landed in the Dardanelles during World War I.

11 days, Australia to Australia, we spend a brief time in Istanbul before heading down to the Dardanelles for an in-depth look at the battlefields of the Gallipoli Campaign. From Lone Pine and Chunuk Bair, where the Australian and New Zealand Forces were stationed. To Kabatepe, and the Turkish positions, to the French area of operation in Cape Hellas to Sulva Bay in the North where the British Landed.

We have 2 fantastic departures, one in July and one in October, for more information, read on ..

END_OF_DOCUMENT_TOKEN_TO_BE_REPLACED

The visitation of Anzac Cove and the Gallipoli Peninsula in the Dardanelles over ANZAC Day (25th April) has become something of a pilgrimage for many Australians, especially in recent years … and next year, 2015, is the 100th Commemoration of the Landings at Anzac Cove in World War I, and it is turning into a huge year for attendance, with actual allowed places being drawn by Ballot.

If you would like to visit Gallipoli over the 100th Anniversary we have a fantastic tour available, with limited spaces, and the ability to help get you to the formal services if you are a ballot ticket holder, or you can join us at an informal gathering away from the cove.

For more information on our tour please click here!

A Motorbike Voyage Through Vietnam

While not technically a battlefield tour we will be running a Motorbike journey through the North of Vietnam in April 2014, and will have options for people wishing to get out and see Dien Bien Phu. For more details on this journey please click here!

Just a quick announcement to let everyone know that our Tour Departure for the 72nd Anniversary of the Guadal Canal Campaign is now available and details can be viewed here!

Despite the fact that there was NO known Australian participation in the American Civil War it is non the less a piece of history that has had resounding effects on conflict in future campaigns as well as social and economic ideologies in the centuries since and well beyond the American Boarders.

In April 2014 we will have a 12 night 13 day programme commencing Sunday 27th ex Washington, visiting the Eastern Theatre Camapigns of the American Civil War

Despite the fact that these events occured  over a hundred and fifty years ago the stark images that we even now see are no less moving or poignant than those we would see in those taken during either World Wars, the Vietman War or any other conflict. To give you an idea of what those times were like take a look at this powerpoint slideshow that came to me from a fellow Battlefield Enthusiast from source unknown. USA_1861-1865 , was probably one of the earliest conflicts we could say was the dawn of modern warfare with a photographic and visual record.

Our 2014 Anglo-Zulu & Boer War Journey is now available!
Itinerary and flyer available , just click on the below postcard.
Please email or call for more details or to book in your place today! 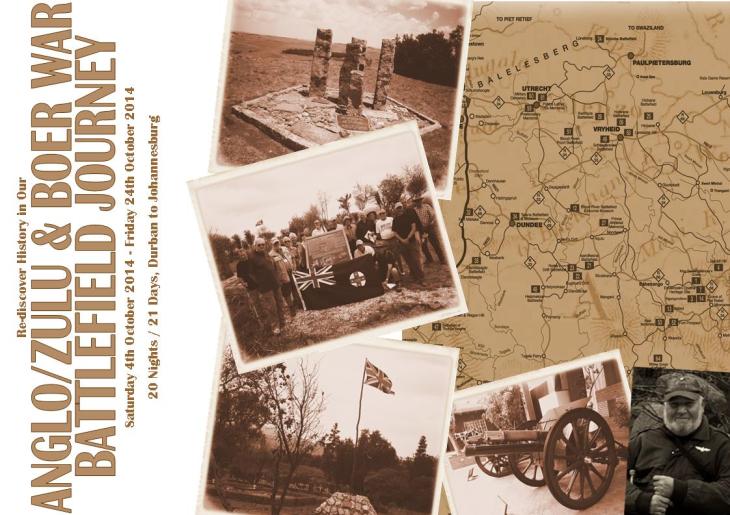 Our programme for the 47th Commemoration of  the Battle of Long Tan and Australia’s involvement in the Vietnam War is now available. Please just click on the below image and follow the links to review. Otherwise contact Dennis for more information!

Full details for our 2013 Anglo-Zulu & Boer War journey are now available. Please click on the below image and follow the links or look up the flyer on the Tour departures page for more information. Spaces are limited, so if you are interested please contact Dennis Weatherall soon to secure your place on-board.

The release of the full itinerary and costing for this departure due on the 8th July. By a double click on the “flyer” you’ll be directed to a hyperlink in blue text entitled “battle of britain”, a click here will take you to a very detailed daily itinerary and the final page that gives you all the inclusions on tour.